(Of a word) closely connected in pronunciation with the following word and not having an independent accent.
~What a, huh?  See this is why I like Wed Word, cause occasionally(cof...sometimes more than I like to admit) a word boggles my mind.

If someone asked me on the street if I was proclitic, well my first thought would be Hell's yes!  I'm for sure not anti-clitic!  LOL  But of course this word has NOTHING to do with that, but yes, I go there.  *wink*


So, needing a better definition of this word I checked out another source...  Now it makes more sense.~

“Hell and damnation.”  The pain in Trent’s head made him wonder if there were a fleet of tiny jackhammers rearranging his neural passages for shits and giggles.
“A-are you okay?”
So she hadn’t left as he’d expected.  Her voice was soft and whispery, different from what he’d expected from someone with her strength and moxie to boot.
Were it not for the stars flickering and obscuring his vision, as well as the inability to stand and keep his stomach where it belonged, he would get up and paddle her ass for causing him such distress.

~Six from a WIP in my jaguar series.~

Stop by Six Sentence Sunday for more sixes.
Posted by Serena Shay at 5:14 AM 15 comments

Sore feet and sunburned but boy did we have fun!  Darling Diva found herself in possession of a free pass to our local water park for doing her summer reading, way to go Diva!

The wave pool was a hit for us all.  Sitting in the shallows while the waves moved us in and out of the surf, walking out until each wave neared DD's face and riding the waves back in...if only we lived on a coast I think we'd all be learning to hang ten.  ~smile~

After being battered around in the wave pool it was time for a bit of relaxation, aka The Lazy River.  Another personal favorite of mine.  Sun, tubes and water sprinklers make this water feature the perfect place to forage the imagination for story ideas and let some of life's stress just float away...

DD found a tube slide she just had to try and convinced her adorable Daddy to take her on it...after the first two times down, DD had the swing of things and no longer needed her security-daddy to hit the heights.  Much to Dear Hubby's delight and dismay.

All in all it was a great time, sore feet and sunburns included!
Posted by Serena Shay at 10:07 AM 4 comments

~Holus-bolus comes from a mock-Latin rhyming compound based on the phrase "whole bolus."~

Now doesn't this just sound like a magical word?  Or, perhaps a potion made up of all kinds of funky-fun ingredients. lol  Darling Diva and I have been watching a bit of Charmed this summer, I bet their kitchen would have just what we need to create one spanky holus-bolus for the soul!  ~grin~
Posted by Serena Shay at 4:43 AM 5 comments

My apologies to everyone who struggles with math as much as I do, but this was too fun to pass up!

3. If you cut 8 in half down the middle vertically.
Posted by Serena Shay at 7:58 AM 4 comments

"I love books about magical beings and this one was no different...I was swept away in the beautiful adventure Ms. Shay took me on."  3 cups from Kimberly at Coffee Time Romance & More

Thank you, Kimberly!  You've given me quite a smile.

Check out the size of that lobster, holy cow, er lobster. Seventy-five years of life in the wide open sea only to be caught in a trap to become someone's dinner. Good on ya, Jennifer for finding him/her a home!
Posted by Serena Shay at 9:54 AM 6 comments

Just a few of the many descriptions of love; each and everyone of which, plus more, I feel for my Dear Husband.

Thanks for the best 15 years I could ever have asked for!  How are we going to top them in the next fifty or so? 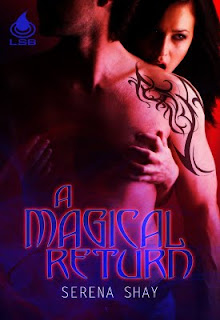 Oooh, lookie, lookie at what I got from the awesome Savanna Kougar, author of the newly released Kandy Apple and her Hellhounds.

I was thrilled, and touched, to receive such praise for my recent release, A Magical Return.  Thank you, Savanna...I'm so glad Con and Emterra's love came through to you.  ~smiles~


Author Discovery ~ A MAGICAL RETURN by Serena Shay Before reading A MAGICAL RETURN, I was intrigued by the premise of this story, an unusual one for me despite my fascination with all things paranormal. Let me tell you, Serena Shay’s latest book powerfully delivers on its promise of ‘magic’, Latin included.That said, the joy for me, as a reader, was in the relationship between Conleth and his ‘unbelieving’ woman, Emterra. Because, not only am I a sucker for true love, I have this deep yearning to ‘feel’ the intimate passions between a hero and his heroine. Too often, I’ve found that deep connection missing. Not in Ms. Shay’s highly erotic love story. Note here: the sexual pleasures explicitly titillate the senses, and is not to be missed. Yes, Con and Em’s reunion is deliciously complicated by their witch Others. However, Ms. Shay gorgeously writes the impassioned nuances between her lovers in a way that allows us to experience their unique, one-on-one intimacy. And, I felt every delectable nuance. Thank you, Ms. Shay.

A Magical Return available at Liquid Silver Books, Amazon and All Romance eBooks.
Posted by Serena Shay at 5:00 AM 4 comments

Guess Where I Am Today?


Come on over and take a peek!  ~smiles~

Aesopian \ee-SOH-pee-uhn\, adjective:
1. Conveying meaning by hint, euphemism, innuendo, or the like.
2. Pertaining to, or characteristic of Aesop or his fables.
Aesopian gets this general sense from its original meaning as a reference to the inferential nature of Aesop's fables.
~LOL, I bet this is something most people in a relationship do together...especially if they have young kids around!~
Posted by Serena Shay at 5:12 AM 4 comments

Q: In Greek mythology, who was the goddess of the rainbow?

With eyes closed tight there was clarity in sound
Metered breaths; focus abound
A gentle touch to inflame the skin
A whispered word; no shame within
For pleasure was as pleasure is
A gift for all—to receive and give.
More Sunday Scribblings here.
Posted by Serena Shay at 1:16 PM 7 comments

His life would have been far easier if he’d been trudging through mud-caked, bug infested jungles in search of drug kingpins or slave traders.  His nerve would still be spot-on if he could be facing down the horned beast on safari or swilling coconut rimmed banana drinks on the beach with a barely clad lady, or two.
“What do you think, Uncle Trak—24 or 26?  A or B cup?”
His face burned with the same intensity as his shoulders.  How did women carry around all of these bags while still shopping and in some cases corralling two point five kids?
“Uncle Trak, are you going to pass out?”
Only if he was lucky.  What had his monkey-assed brother been thinking to name him as guardian of an eleven-year-old, pre-teen emotional time bomb?
“Do you think color matters?  Should it be pink or purple, oooh red and silk?”
Red silk at eleven?  “I can hear the stripper music already,” He grumbled under his breath, while dodging his nieces questioning gaze.
“So…red, silk or pink and purple.”  She held the undergarments up for he and the entire world to see, waiting impatiently for his answer, but all he could do is stare at the small piece of material he’d once love to see on and off a woman.  Now though, he’d never be able to enjoy the sight without thinking of this horrible moment.
Freaking story of his life.
Trak sighed and gave up the hope that he would get through this without having to speak or be seen.  In for a penny, in for pound.  He thought about his mother’s tired old cliché and ground his teeth at how well it fit the situation.
“Don’t they have a plain white training bra at this place?” He looked around, praying no one had heard him talking bras.
“WHAT?  I HAVE TO TRAIN THEM?” The shock on her face nearly turned him inside out.  Had no one explained what was going on with her body…did this mean he would have to explain her period to her too?  Oh shit, would he have to talk to her about sex, as well?
The store seemed much brighter than it had moments ago and the cold sweat washing over him left a sick feeling in his usually steel stomach.  He couldn’t do this…he just couldn’t.
“Uncle Trak, will they learn to sit, stay or heal maybe?”
Sit, Stay…what?  The tipped eyebrow told him he’d been had in a very large way.  She’d been screwing with him much like his brother always had.
“You’re so easy, T,” she laughed, turning to pick the exact bra she needed.  White, thank God!  “By the way, you need to meet some new women.  Not every red bra wearing woman is a stripper.”
Shit, eleven-year-olds had really good hearing.
~~~
Stop by Bluebell Books and join in on the Thrusday Story Slam.

1. Of or pertaining to divination.
2. Having the power of divination.
~Shoot, these days, I wish I had the mantic sight!~
Posted by Serena Shay at 7:45 AM 2 comments