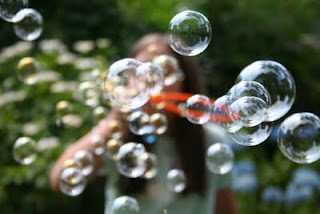 Bubbles.  Dia cringed and slunk back to the communal dressing room.  Those damn soapy circles had gotten her in more trouble through her lifetime, yet she could seem to get away from them.

As a kid, more than one of her mother’s temporary friends had given her a bottle of the liquid laughs.  Usually it came with a quick shove and a terse “go out and play will ya.”  What those winner friends seem to forget, or really probably didn’t give a rat’s ass about, was that they lived in Minneapolis, MN and for more months out of the year than not, it was freaking cold.

Below zero cold.   In the dead of winter the weather was not really conducive for a young girl to be running around outside, blowing bubbles.  So her solution was just to do them in her room.  She’d sit on the older than her mattress and blow those soapy wonders into the air; dreaming about a time that wouldn’t be so bad.

Dia watched her reflection in the beat up old mirror as she applied more mascara to her already dark lashes.  God, those bubbles would piss her mom off something fierce.  When she would finally totter her way into Dia’s room, stinking of cigarettes, booze, and sex, she would scream a blue streak about the sticky, soap scum left on the battered up hardwoods.

Dia had learned to scrub floors by the age of six.

The squeak of the ancient door to her right drew her attention away from her face and to that of her best friend, Tika.

“You’re on in five, D.  Don’t forget the non-skid shoes this time.  I just don’t know how you dance on that wet floor?  The bubbles are cool and all, but damn dangerous if ya ask me.”

Dia tuned out her friend, who would continue unimpeded if she wasn’t interrupted, and returned to doing her make-up.  Yeah, sure, bubbles are cool.

Hell, maybe they were if you weren’t Dia’Mond  Barkawetz.  Yes, that was her real name.  What her mother had been thinking, she’d never know.  The name was as much of a pain as the damn bubbles were in her life.

“D, honey, you’re almost on and your face is only half done. “  Tika stepped to her side and turned the chair away from the mirror.  “Here, let me finish up for you.  The lashes are, well, dark.  Girl, did you forget what you were doing?  You’ve got to come back to me now, ya hear?  It’s just one more night, D.”

“You always say that, Tika. Yet here we still are.”  Dia looked up at her friend, who was franticly applying blush, shadow and lipstick in swift strokes.

“And I always mean it, D.  Unfortunately, the economy is still not in our favor and our Prince has yet to come…but he will, doll.  He will.”

Dia could hear her music starting as Tika pulled her from her seat and straightened the barely there top and bottom.  She dragged her to the stage where a bucket of suds waited and the room out front was filling with bubbles.  The suds were placed over each breast and the front of her panties and she was pushed on stage right before the spot light hit her.  The smile went on, the suds came off and she got to know the pole a whole lot better, but the entire time she stared up at those soapy wonders and dreamed about a time that wouldn’t be so bad.

Stop by Bluebell Books for more short story slams and more...
Posted by Serena Shay at 4:00 AM