Here It Is, The Tuesday Temptation... 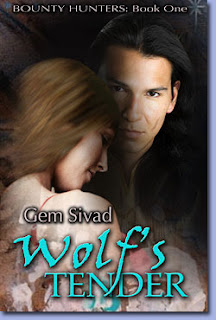 Gem Sivad has done it again! The author of the awesome, Eppie finaling, Intimate Strangers, has released another western tale!


Wolf's Tender - book one of the Bounty Hunters series, has tempted this reader since Gem first shared it birth over on the Liquid Silver Books forum. Check out the blurb and excerpt below taken directly from the authors site-thanks Gem, and tell me you are not tempted....

BLURB: Wolf's Tender
Rough and tough Charlie Wolf McCallister knows he needs to get laid, when the prim and proper school teacher with a sharp tongue, starts looking good to him.
When Naomi Parker’s students are snatched from their school by marauding Comancheros, the only way to get the girls home safely, is to hire the half-Kiowa bounty hunter.
But Naomi has no cash and Mr. Charlie Wolf McCallister won’t take her I.O.U. His price seems a bit steep when Naomi must choose between her virtue and her students’ lives.
Cad that he is, Charlie Wolf operates on the philosophy that a bird in hand is better than no bird at all, and the longer he’s around Miss Naomi Parker, the more he wants this particular chickadee from the Sparrow Creek Ladies Academy. And so he offers to trade service—for servicing.
When one straight-laced spinster, tenders her body to one cynical sometimes savage, the unexpected bounty is love.
EXCERPT: Wolf’s Tender
“I don’t work for free, teacher. How do you plan to pay me?” He raised his leg and flexed his muscles brushing hotly against her through the material that separated his flesh from her core. Given the state of his arousal, it was a dangerous move.
“I get paid once a month at the school.” She looked worried. “I’m not sure now who will tender my pay. It’s not clear to me what’s going to happen.” She continued to stare over her shoulder, her female parts riding his thigh, his cock stretched and elongated against his leg.
Well it’s clear to me what’s going to happen here in about two minutes if you don’t get the hell out of this barn. But Charlie didn’t say it aloud. Instead he looked at her face, scrunched in worry, her teeth nibbling her bottom lip, and had the almost uncontrollable urge to lift her up and bury his face between her breasts (they were looking more like melons to him now).
All sense had left his mind. He was concentrated on one thing…pussy and how to get into it.
First, I need to get her out of that godawful wire contraption she’s wearin’… His cock was full and demanding release, and so it was with real reluctance that he offered her one last chance to get out.
“How you get paid is none of my concern. I don’t take i.o.u.’s, in poker or for chasing danger, so if you don’t have something to offer me in payment, you best be leaving, and you best do it now.”
Her chin tilted up and she repeated, “I need to hire you,” and then she turned back to her task and slid down his outstretched leg, and he knew that she was aware of her effect on him. She grasped his boot and tugged. Well, maybe we can work a deal.
Posted by Serena Shay at 9:01 AM