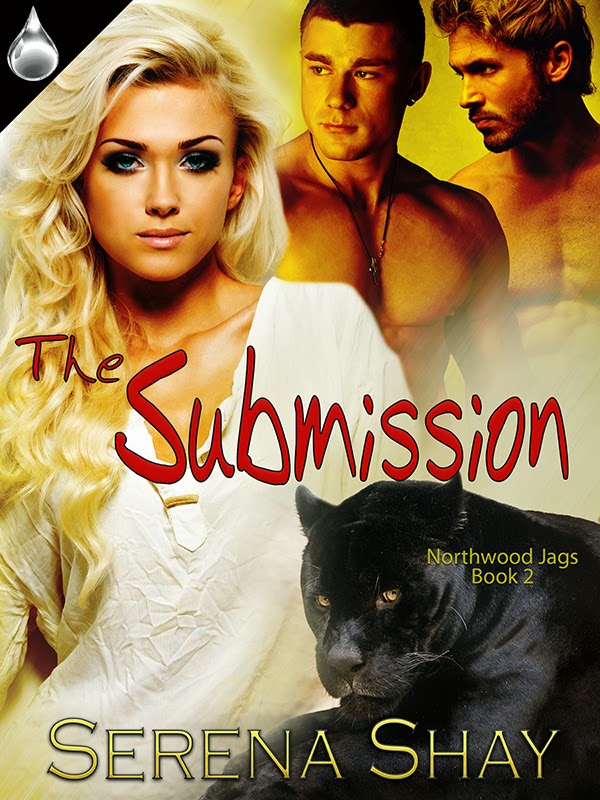 Now this is the way to wake up!  My newest release, The Submission, is now up for pre-sale at the LSbooks site and for an added delight, it's offered at 20% off!  What a deal. :)

Two is better than one. Most would agree with that statement, but not full-blooded shifter LeAnn Turone. To accept her need for multiple partners means facing a lifetime in a one-sided triad. She’s better off denying her heritage even if that means walking away from two of the most delectable alpha males she’s ever met.

Rick Taylor and Trent Warren each think they’ve found their mate in LeAnn, but a midnight meeting deep in the woods proves them wrong. Not only do they both long to connect to the sexy, but skittish female, they also find themselves attracted to one another.

Each member of this triad must free themselves from the fear of the future and submit to the greater power of love.

“Hell and damnation.” The pain in Trent’s head made him wonder when a fleet of tiny jackhammers decided to rearrange his neural passages for shits and giggles.

So she hadn’t left as he’d thought. Her voice was soft and whispery; different from what he’d expected, yet it still oozed strength and moxie to boot. If not for the flickering stars obscuring his vision, and the inability to stand while keeping his stomach where it belonged, he’d paddle her ass for causing him distress.

“How do you think I am after taking a chair to the back of the head?” he groused from his laid-out position on the floor.

Trent spied her feet moving closer to the front door. He needed to rein in his anger and belligerence if he hoped to keep his newly found mate close. She’d suffered a horrifying attack—growling at her would just send her running, but what had stopped her from laying waste to the idiot attacking her. Her shape-shifter strength far exceeded that of some human male.

“NO, wait…” Trent lifted his head sooner than advisable. Stars throbbed in his vision, and his lunch almost succeeded in its bid for freedom. “Fuck!”

She paled, more than he’d thought possible for someone with such fair skin. Her eyes were wide with fear as tiny cries escaped from closed lips. So lovely and all his, but the knowledge of anyone, including himself, hurting her infuriated him.

“What’s your name, beautiful?” Trent asked when he was finally able to move from his hands and knees to his ass.

She shook her head with the slightest of movements, facing him but keeping her back to the door.

“What shall I call you then…mate?”

“Not that! I have no intention of mating with anyone.”

“Really?” Trent rubbed his thumb and forefinger around the pressure points between his eyes and above his nose. “Why are you still here, beautiful? Morbid curiosity? Want to see if you were strong enough to kill me?”

“Of course not. Omygosh, don’t die! Did I hurt you worse than you’re letting on? Should—should I call an ambulance?”

Yet she still didn’t leave. She’d drawn her face into a question, one he’d bet would be left unasked.

“So no name…Can you at least tell me what you have against mating?”

“Because something is wrong with me.”

“Are you sick?” His growl made her move farther back from him, nearer to the door. He’d finally found the one thing he’d begun to think wasn’t available to him, and she claimed to have something wrong. Fuck, don’t let her be sick.

“No, I-I’ve chosen not to follow through with an act that will destroy someone— because of love.”

“Cryptic much?” What happened in her past to cause this young and beautiful woman to treat such a fine word with vile disregard?

“Tell me, mate, did you like good old Rob’s brand of play?”

“You—you, ass.” She turned and swung the door open before looking back at him. “Don’t follow me!”

Trent berated himself as she escaped into the night. What sort of idiot would ask her something so shitty? His lame excuse—the near braining she’d given him.

Yeah right, he wouldn’t pursue her. She was his mate. He’d track her to the ends of time—that is, when he could get his feet under him and remove the stinking human she’d kept him from killing.